Through The Keyhole : A Look At Our Past

Way way back whilst I was at Knowsley Community College and Eugene was at Hugh Baird College, we began photographing and filming weddings. Whilst studying film and media, the decision had already been made to work with cameras as a career.  After finishing college, Liverpool John Moores University was the next stop, focusing on Media Professional Studies.

The first professional set I worked on was an ITV drama called Heartbeat, shot in Yorkshire. 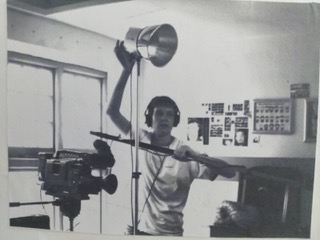 Our first studio was in Lewis's Department store in Liverpool City Centre. We had a small office, 2 edit suites and a photography studio.

Whilst developing and growing the business, we were also involved in many commercial productions, primarily working full time on a live show which was broadcast 5 nights a week.  We provided vision mixing, camera and general services to the live show and we got to develop our skills in a professional environment, using industry standard equipment and working with professionals.

It quickly became apparent that the same skills, equipment and standards that we applied to our commercial work when applied to the wedding side of our business left us in a unique position.  At the time there were very few wedding photography and videography companies. In fact I’m pretty sure we were the first in Liverpool to offer both services in house. Today there are people who offer both services, but one of them is usually outsourced to another person/company.

One team shooting, editing and working together each day definitely delivers a different product.  In addition to this, our entire team were university graduates and seasoned, skilled people whereas most of our competitors were doing weddings as a second job.

We won a contract with Liverpool City Council to establish a programme to work with young people, creating films around issues they felt were affecting them. For 3 years we worked all over the city engaging with groups and creating films around cyber bullying, racism, knife crime and many other concerns. This was a great project to be involved with and we met some incredible young people, many of whom we gave work experience opportunities to and even paid positions.

We also set up an online music platform called Band In A Box, where we travelled across the UK hosting live gigs and booking multiple unsigned bands. The events were filmed and streamed on our platform.

From Scotland to London we travelled up and down the UK hosting these events and even engaged with signed bands such as Ocean Colour Scene.

As the business grew so did our investment into the company. This has always been key to us, everything we earned would get pumped back into the business, allowing us to grow and develop.

Circa 2013 we were flying around the world covering automotive content in Paris, Geneva and Monte Carlo. We had invested in some of the best equipment on the market and we had even purchased a Red Cinema Camera! We didn’t use this for weddings though as the camera was that big it took two people to operate!

It was at this point we decided that to better our offering in the wedding business we should invest in wedding cars and accessories, offering our clients an even better service with greater variety.

From this point onwards we have put so much energy into the wedding business, constantly looking to improve our offerings, the styles and overall service.

We still shoot many commercial items and we have been involved in multiple television items, commercials for broadcast and content for global corporations.

There have been many occasions when working on commercial items and chatting with fellow creatives, that when the wedding side of our business is mentioned there is a form of snobbery upon shooting peoples special day.

I believe this is the case because in our industry there are multiple levels of skill and most of the people involved have developed these skills over their lifetime.  As in most careers, hierarchy plays a part in the makeup of the organisation. For instance, the camera assistant likely has much less experience than the camera operator who has a different skill set to the director. There is however respect and acknowledgement for each of the roles.

Whereby in the wedding industry, pretty much anyone can buy a camera and lens for less than £1000, build a website and offer their services as a ‘professional’. In contrast, this method just wouldn’t work in the corporate industry as the positions have to be earned and proven.

This never bothered me or my wife though, as we knew the standards we brought to a commercial project we also brought to a wedding. The same vans, the same cameras (mostly, except the cinema camera!) and the same edit suites all used, but more importantly, the same levels of experience and attitude.

The reason this post came about was recently I was putting together a document detailing the history of our company to date. Looking back on some of the projects we have been involved in, the events we have documented, the people we have engaged with and the countries we have visited, it made me realise just how far we have come. From the back bedroom of our parents house all those years ago, to our very own custom built studio has been quite a journey.

It is this journey that sets us apart from so many other ‘wedding photographers and videographers’ and quite often it's a question people fail to ask when booking, ‘what does your CV look like?’

Maybe try it on your own journey of booking people for your wedding, I don’t know about you but experience is key!

We Need Your Help!